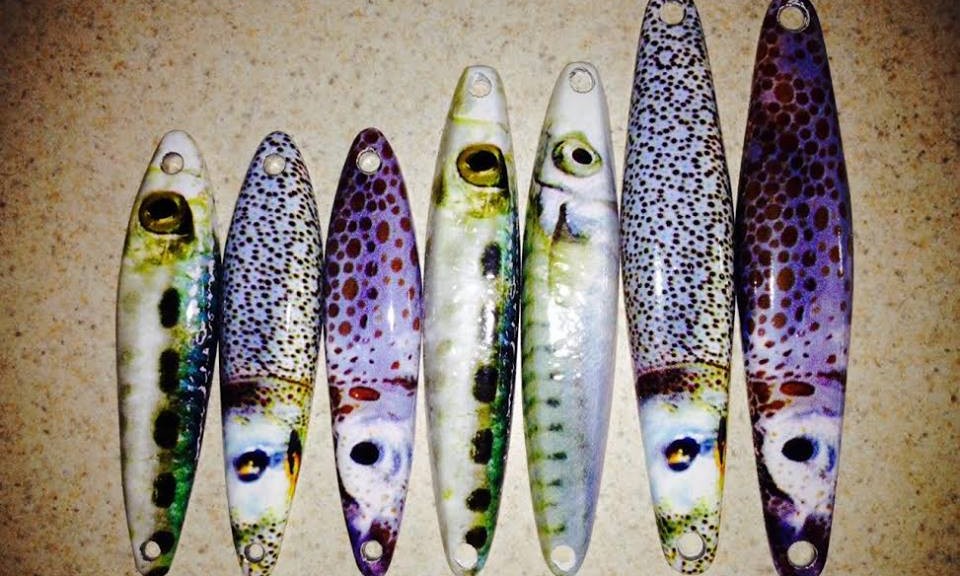 We put together a Bait Wraps sponsored trip on the Pacific Quest. First run was postponed due to boat work, and rescheduled to Sunday April 24.

Long day, short story. The wind was up so Captain Greg decided our best option was to see if we could get some squid over night and look for seabass on Sunday.

It was a rough ride out. The guys were able to find some squid that floated, but the sea lions did their best to scatter it.  They ended up with probably around two scoops worth.

Captain Greg tried well over a dozen spots, but the fish were largely uncooperative. We had a couple of spots in the morning with decent bites on calico bass, mostly short but one really nice one.

A small barracuda that was released and having trouble recovering produced a great show from a group of eagles late morning. One of the eagles got the fish, with two others following and trying to steal it.

Shortly after that, Stew picked up a short seabass, but that was the only one we found there. Another spot found four of us hooked up at once and optimistic, but what we landed was two leopard sharks, a shovel nose, and a bat ray.

We did a couple of drifts over Farnsworth for not even a nibble.

Then back along the beaches in milky water for the afternoon when the tide was changing. The squid lasted through the day, and one angler managed one legal white seabass.  (Then the guy who caught it lost the rod he caught it on over the side just a few minutes later… )  The crew and a couple of passengers tried to snag it with a jig, but we were unable to locate it again.

We finished the day with a couple of drifts by the quarry hoping for some ling cod. They weren’t playing either, and just a couple of nice rock fish was all that came up out of that.

Great breakfast burritos and burgers from Jeff in the galley. We had a really nice group of anglers, and a lot of fun in spite of the weather.  And everyone got a brand new Bait Wraps Kraken jig to take with them.

Thanks Greg and the crew of the Pacific Quest! I love this big little boat!!  There’s always plenty of room with the loads limited to only 12 passengers!  I have some great trips on this boat, and this was another one!

The Pacific Quest will be running trips to the islands and offshore from Pierpoint in Long Beach through much of June, then they’ll move back down south late June or early July for the tuna season. A complete schedule can be found on their web site: