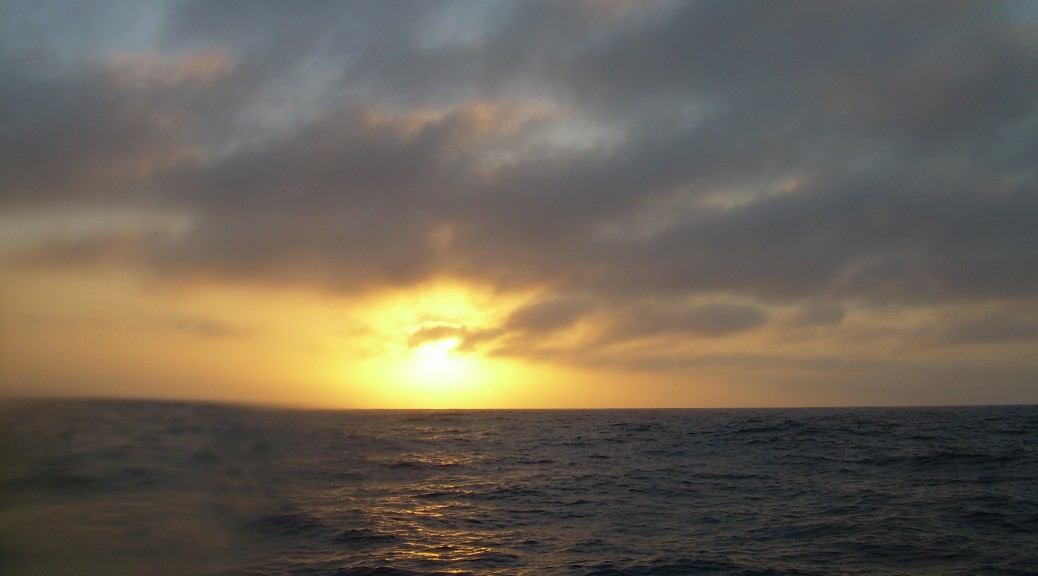 The weather forecast looked good (yeah, they’re wrong sometimes!) when we packed up for the drive to San Diego Thursday afternoon. We stopped for a quick visit with Jason at the BD Offices, and arrived a little later than we’d hoped.  The “LOT FULL” sign was out, but we pulled in to offload our gear, then I was going to go look for a place to park.  We got lucky… a couple of the day boats were just unloading and we got a spot in the main lot anyway.

Checked in at the office, and the boat was mostly loaded already. Fortunately, it was a relatively light load… only 22!  Still plenty of space for our tackle bag and rods!  Danny ran to Mitch’s for take-out, but the line was hopelessly long, so he got us a burger and fries from Jack in the Box.

With everyone loaded, off to the bait dock for some medium sized very lively looking sardines. The plan was to do some paddy hopping Friday, then head to the area off Ensenada Saturday where there had been some yellowfin caught the last few days.  After rigging all my rods, there was pizza in the galley, then I turned in for the night.

I got up when the engines slowed to start trolling, but it was only minutes before we made a stop on our first paddy. After two or three of them, we found one that was holding a few fish.  We hooked several on that paddy, put three on the boat.  Mine was the second of those.  We ran up on the paddy again for nothing.  Several more paddies, a few holding… by 8:30 we had 15 fish on the boat.  Three of them were mine!  They weren’t particularly line shy; I was fishing 30#.  But they were picky about the sardines…

The weather was rough in the morning, and only got worse. Those 15 only made it up to 25 through the rest of the day, plus two yellowfin on the troll.  Jackpot fish was 29#.  All the fish were good sized, we ran into one paddy that was holding some really small fish, and Captain Chris left as soon as we got a good look at them.

Dinner was carnitas tacos with black beans, rice, and handmade tortilla chips. You could smell that pork roast in the pressure cooker all afternoon… it smelled awesome!!

Day two; I got up again when I heard the engines slow to trolling speed. The wind was howling.  By mid-morning the conditions were worse than uncomfortable… it was pretty bad.  We trolled all morning for not a bite, stopped on a couple of meter marks but the fish were gone before we even got set up to drift.  I had lunch and went to take a nap.

The engines slowed, and I debated getting up. The boat was rolling severely once it was set into a drift, but I got up anyway, fearing I would miss something.  Wind was blowing across the tops of the waves and spraying everyone on the rail, hand wells dumped water on anyone standing next to them.  Captain Chris said the fish were down 60 to 80 feet… and we had no torpedo sinkers in our bag.  I mooched a 3 oz from the crew, found a stray rubber band on the floor (these need to be added back to our tackle bag!)…  and cast off the stern.  I’d just turned the corner when I felt a slight tug.  Then nothing.  A second later, the fish came back around and grabbed the bait again.  Rough seas and 20# line, I wondered if I’d get it to the boat!  Robert (one of the deckhands) stood behind me and made sure I didn’t fall over backwards, and we managed to get the fish on the boat!

That was it for a long time. The day dragged, with no jig stops and an occasional stop on a meter mark of vanishing fish.  A huge pod of dolphins held no fish, or if it did they wouldn’t bite.

Finally, late afternoon we stopped again. The weather was coming down and just as it seemed Captain Chris was ready to give up on a school of yellowfin, they started to bite, and bit for close to an hour.  Not a wide open bite by any means, but we ended up with 30 of them.

Dinner was bacon topped meat loaf with a cob of corn, salad and mashed potatoes. Comfort food, after a rough day…

We were back at the dock just past sunrise, offloaded and on our way before 7:00 AM Sunday morning.

We ended up with 25 yellowtail, and I think around 30 yellowfin, for 22 anglers, in spite of tough conditions. Captain Chris has a great crew on the Chief who worked together well.  Fun trip, I can’t wait to go again!!