I won a basket of four overnight passes for the Eldorado at the CCA Barbeque a couple of weeks ago. It was a great deal with the money going to a good cause.

Danny and I decided a local trip on Sunday might be fun, as Saturday was already sold out. We went down to the landing early Saturday to get some fried calamari next door, then checked in and got our gear out of the car.

The trip was schedule for 8:30 departure. We boarded around 8:00, got our geared stowed, and rigged up for the morning. The plan was to run to San Clemente to fish for yellowtail. I rigged a heavier set up (40#) for dropper loop, another with a slider, 30# for flyline, and a 20# for bass, and went to bed.

We got to the island very early, I guess we got some squid from a light boat out there (Dead or Alive) and the crew set out lights and made a little more. We already had some on board, so we were set with enough to fish with, though not enough to waste.

I got up around 5:00 AM. We had no bites at all until probably

around 7 AM, then lost half or more of the first 10-12 fish to a sea lion. After an hour or so, though, he seemed to have disappeared. We were bothered some throughout the day by some smaller ones, but losses of fish to them were mostly early morning. 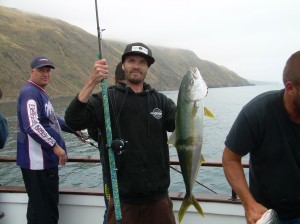 We stuck around the same area pretty much all day. Captain TJ reset several times, usually setting off a new bite shortly after dropping anchor again. We picked away all day, usually hooking two or three at a time, losing a few, landing probably most. Not much around in the way of bass or other fish, although we did land a few calico bass, some legal, some whitefish, and a few sheephead.

We ended up with something around 35 yellowtail.

The weather was beautiful. The crew is awesome! TJ has a great group of guys on the boat, galley and deck! Food was great, they have some better selections on beer, and a soda fountain for a set price for the entire trip. 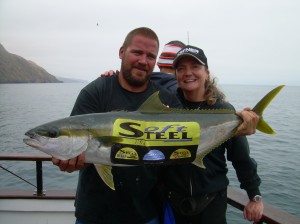