Loaded up with mostly friends of mine (few spots had to go open party). We stopped at the bait dock for a load of smaller sardines, plus a load of larger sardines with some huge mackerel mixed it. It looked like we had some awesome ammunition to get them good at Catalina.

Saturday they had been out with a charter group… 40-some close friends! (Yikes! The boat is coast guard approved for that, but that’s going to be pretty crowded!) Captain Joel put them on a great bite of yellows and they put about 50 of them on the boat, so we were all stoked and excited.

I rigged up and caught some zzz’s on the way to the island. Nice ride in calm seas with a little overcast. We set up on a spot and the bass started biting within minutes. The smaller sardines were the perfect bait for them!

The bad news was most of those bigger sardines rolled on the way to the island.

Jeff Dalton got a really nice yellowtail fairly early, finding one of the larger sardines that made the ride over. I threw a mackerel at them that generated no interest, no one else got anything in the water that would entice them at that time either…

We made a bunch of moves… Lots more bass, most of them released, and a few smaller yellowtail pretty much rounded out the day.

Mike made me a huge birthday double burger that was very messy and very good!! There were also Jim Racela’s flaming Spam balls, and some chocolate chip cookies (I gave Danny my secret recipe and he did a great job on them!! ).

Always a good time on the Gail Force! This is a great boat to charter for a small group, their regular load is 20 people but if you like a crowd you can put more on there… 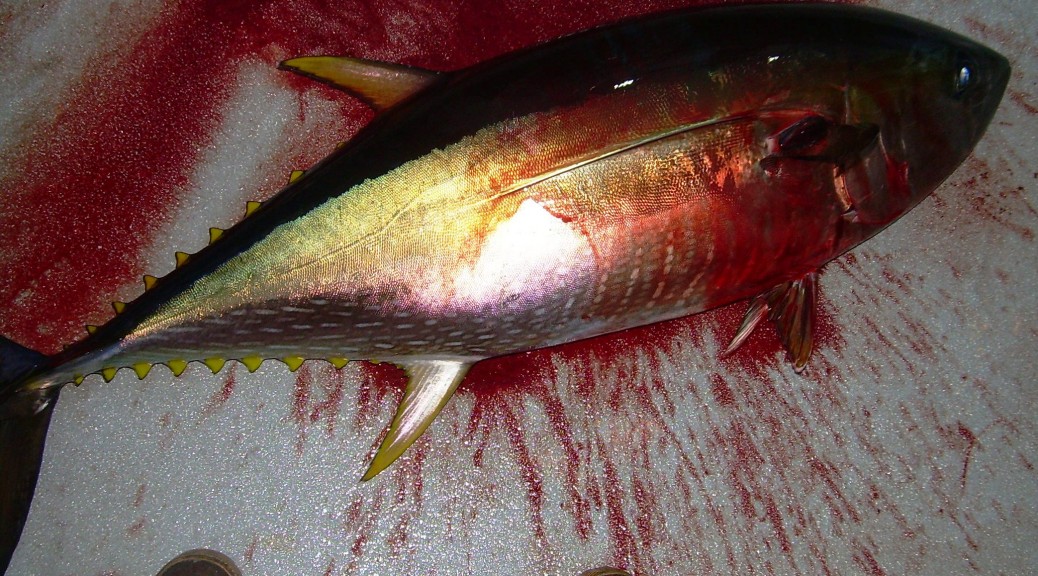 Danny Lynch’s longtime friend Wayne Carr is running trips on the Dominator, so we decided to go on a two-day weekend trip that was on the schedule. Rich Whitaker offered to sponsor a raffle for us, so we had a few jigs to give away to help in promoting the trip.

We ended up with a load of only 14, an awesome number on a boat that size! We got on with our gear and picked out bunks… all of them are pretty much double bunk size, so plenty of room to stretch out and put your stuff away!

Our crew, led by Captain Wayne Carr, included second Captain Kerim Hussainy, JJ in the galley, and Alex and Jake on deck. They loaded up with some awesome looking sardines and a tank of anchovies for chum. We were plugged and ready to do battle! The game plan was to fish offshore Mexican waters for yellowfin and yellowtail, and then hit some areas in US waters for Bluefin.

The weather was up a little, but not unfishable. We started trolling early Saturday morning in light winds and a bit of white cap. It was not the calm weather that had been forecasted. Kelps were few and far between, and the chop certainly made them more challenging to spot. One of the first ones in the morning yielded a few small yellowtail. Another one a single decent sized yellowtail and a few smaller ones.

Then the kelps became more and more scarce. Tuna fishing became, well…. Like tuna fishing. Long troll rotations, naps… breakfast and lunch passed into afternoon for a stop on a meter mark and one more nice yellowtail. And more trolling….

Dinner was cooking and releasing an awesome smell…. Lasagna…! I was up in the wheel house with Danny and Wayne. Danny was just saying this was about the time when Wayne usually pulled a rabbit out of the hat… when the sonar made an odd noise. Red spots on the sonar screen, and Wayne yelling on the PA to throw bait was enough to send me out of the wheelhouse and down the ladder to grab a rod. Everyone was grabbing for bait, hooking, and tossing them behind the boat. Three hook ups, one broke off quickly. Danny was overheard saying he was under geared, and line peeled off.

One fish hit the deck after 10 minutes or so, 25 pounds or so. But Danny’s on 30 pound line was taking a bit longer. For a while, it seemed like it could have been stuck to the bottom, and line put on the reel was quickly taken back. The sharing sort that he is, he handed it off to me to take a breather, and when he was ready took it back… twice. Checking timestamps on the photos, the battle went on for nearly 30 minutes, but Danny landed his yellowfin, running 45 or so. (Still in Mexico, we were all relieved to see these fish were not Bluefin.)

awesome, then off to bed.

Morning came, with long trolls. No kelps to speak of and the water was a dirty green. Flocks of birds and schools of mammals produced nothing…. chicken fajitas for lunch was our mid-day excitement.  A meter mark produced a single yellowtail.

Dinner was served late afternoon, chicken parmesan with garlic bread. After a long day, we returned to the dock with the two nice yellowfin, two decent sized yellowtail with a handful of small ones, and some more released.

Lots of fun anyway. 6 people walked away with a Bait Wraps jig.

Big thanks to a professional crew who were there to help with every fish hooked, big or small. I can’t wait to get out and fish with Captain Wayne again, and hopefully the fish will be a little more cooperative next time too!