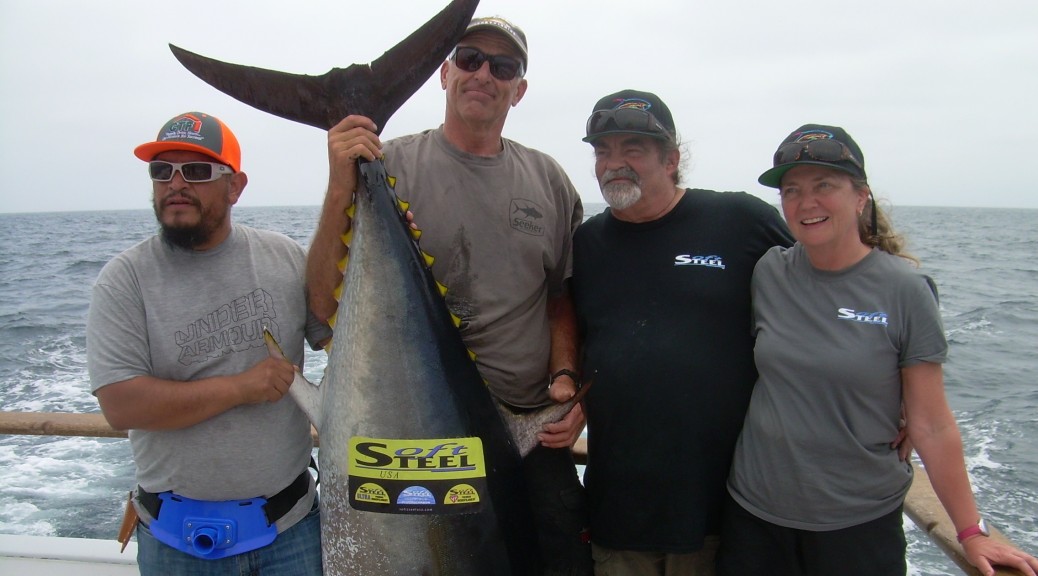 This was a Soft Steel USA sponsored trip.

Danny and I weathered a typically nasty drive down to San Diego, nearly 4 hours to go 127 miles.

The trip was schedule for 9:00 PM departure.  We check in at the office and grabbed dinner at the small “Seaforth Grill”.  Kit is wonderful and always takes good care of us, and remembered us from our last trip late June.

We got our gear out of the car, chatted with other anglers, and boarded around 8:30.  We got our geared stowed, and rigged up for the morning.  The plan for day one was to run down the beach for offshore yellowtail.

Crew was Captain David Burnside, with second Captain Sean.  In the galley was Kyle, with Victor lending a hand both there and on deck, and Robert and Tyler also on deck.  We had a light load, only 13 passengers!

The engines slowed at around 5:30 as we stopped on our first kelp paddy.  I was just grabbing a rod when I saw Danny hook a fish and ran back down for my camera.  (Probably a mistake, I missed our best catch of the day.)  Danny landed what would be day one JP, a yellowtail weighed in at 29 pounds.  The rest of the day was spent filling in our limits of yellowtail, with one 21 pound yellowfin on the troll.

I ordered a burrito for breakfast, but told him I didn’t want the tortilla, just put it in a bowl.  What I got was fabulous!!  Potatoes with cheese, egg over easy on top, bacon and a huge slab of avocado!!  Lunch was just as good – fettuccini with a white sauce and grilled chicken.  Dinner was a nice roasted rare and juicy tri-tip!  Very impressed with the food!

So there we were at the end of the day, discussing what to do tomorrow.  Captain David had settled on heading back up north to fish where some of the big Bluefin had been biting.  Heavy outfit should be ready with either a bait rig with a torpedo on a rubber band, or jig.  Flat falls were working well for them, but be sure to have a very heavy leader so as not to get chewed off immediately.

Up early again as the engines slowed.  We stopped on a few meter marks but no one would play.  The kite was put up with a “yummy flyer”… a large heavily rigged rubber flying fish, that would be bounced on the surface under a kite.  The baited Seeker rod had an Okuma 30W, 150# spectra, 130# Soft Steel mono, and the flyer was on a 400# leader.  As only one can be used at a time, we were put on rotation teams of three.  So first up was numbers 1 through 3, for 30 minutes, then the next three.

Hours dragged by.  We got our first bite at around 11 AM, and the team landed a Bluefin that taped out at 127 pounds.  A second one was hooked 30 minutes later, but lost.

Our turn came around again; me, Danny, and Oscar.  Only a few minutes into our turn, we were bit.  Oscar and I wound in troll lines we’d had our, while the crew brought the rod down from the sun deck.  A clip, that holds the troll line under the kite line, usually releases automatically.  In this case, it did not.  I thought based on that we had a smaller fish, but when they brought the clip and kite down to reach the spectra had melted a groove into the clip!  When the slack was taken in from the main line, the fight began.  Danny, Oscar and I took turns pulling on the fish, and let the crew in on the rotation as well.  From stern to bow, after half an hour fight, the huge fish came into deep color, rounded the bow, broke the surface, and took another short run.  Another agonizing 5 minutes, with Robert manning a push pole to keep the line from rubbing on the hull, Captain Dave and Tyler put gaffs in the fish.  Robert swapped the push poll for another gaff, and they dragged the fish to the open passenger gate and dragged it up through there.

We taped it at 258 pounds!  (Taping is a formula using length and girth measurements to calculate the weight of a fish.)

Food today was awesome again!  French toast and eggs with bacon for breakfast, burgers for lunch, and pork roast for dinner was served shortly after we called it a day.

The three Bluefin were filleted and divided up evenly between the passengers.  With no bait fish caught, the passengers agreed to give the second day’s jackpot to the crew.

Thanks go to the crew of the Tribute, and to Tony Garza of Soft Steel USA for sponsoring this trip.

Awesome fishing, and for Danny, Oscar and me, likely the fish of lifetime!

Soft Steel USA is sponsoring another two day trip with Tribute Sportfishing,  booked through Seaforth Landing, on Friday, September 22.  Space is available, but don’t wait!  This prime of the season trip will probably fill up early.