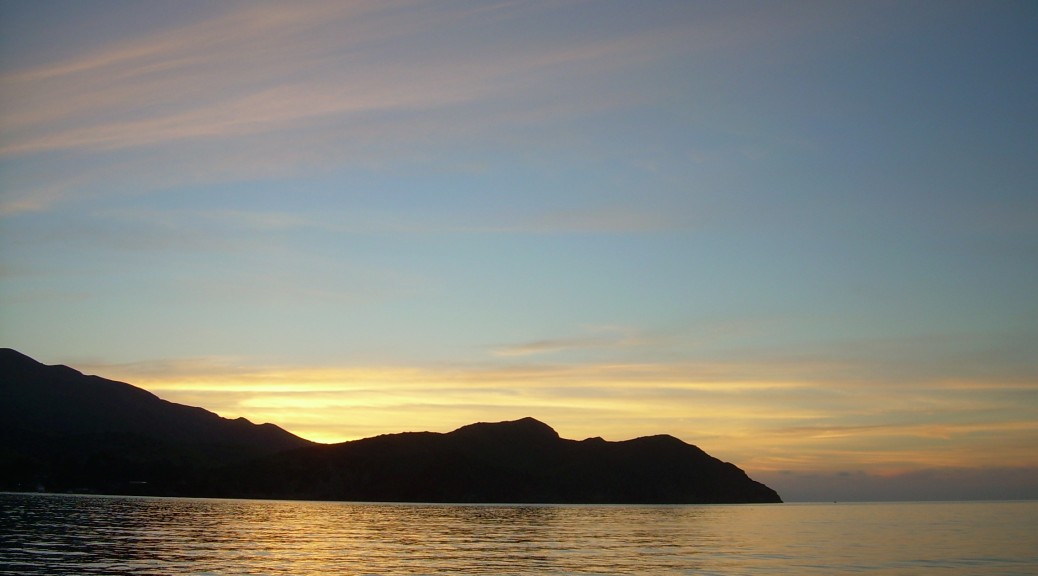 We booked a couple of spots for this trip a few weeks ago.  Unfortunately, Danny had to work, so I had to pull his nets too.
Got to the landing, first one there. I stood around for a while and Jim Racela and his friend Lisa showed up next, and finally we had a whole load of us in line and boarded. And we were off, a few minutes ahead of our noon departure, and a couple of minutes behind the Gail Force.
Nice having the bunks on the Triton, I grabbed one and slept most of the way to the island. The rock fishing wasn’t bad, mostly the typical smaller fish, but Captain Shane kept moving us around and we managed to get a few nicer ones. I brought some shrimp to try to get some sheephead, but I only caught little spotted rock fish on them, and finally got one decent sized red on squid. I decided to have Jeff cook up the rest of the shrimp in the galley. Good move!!

Once we drifted closer to sunset the crew dropped the first set. I signed in as number 1 and Danny as 7. We fished while the nets soaked into gray light and then went to pull. I had a cheeseburger while we waited, finished in time for my first pull… Wow, was I getting weak? The net seemed really heavy. No wonder, my first one had 10 lobsters! 6 easily legal, 4 measured were all short. This was looking really good. Number 2 had 7 bugs, 3 legal… it went downhill from there. One or two legal in most nets the first round. Number 7 (Danny’s….. ) was empty. 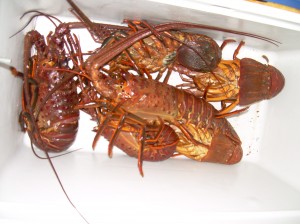 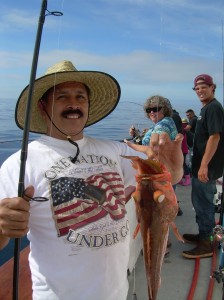 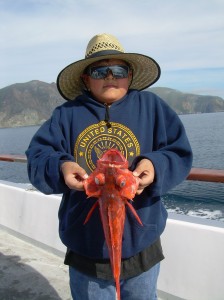 The nets were reset, we fished a bit more. There was not much biting in the dark. Second pull, my number one net had nothing, number 7 had two shorts. We didn’t get many at all in the second set, and by the time those were all up it was time to head in.
I didn’t get an exact count, I’d guess we ended up with around 35. Lots of fun, stiff this morning. Pulling nets in Long Beach harbor was a lot easier!!
That’s a wrap for me on the lobster season!! Good times!